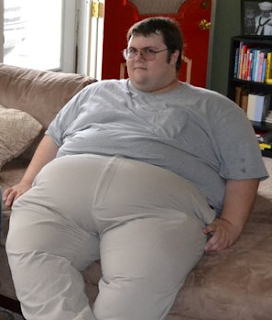 ...less than two years ago. I was at my highest (known) weight of a frightening 520 pounds. I'd actually been near (possibly above) that weight for a year or more at that point. Now that I've seen the light at the end of the tunnel -- and confirmed that it's most likely not an oncoming train -- I've decided to share my experiences. I've waited until now to share much of this in detail because, it seems to me, explaining the sausage making process can be even more difficult that watching it; especially when you're the sausage.

So what happened two years ago? Why did a 29 year old man (who'd been fat since preschool) suddenly decide to fix something that had been broken for a quarter-century? In a word: love. For those who know me and know the situation, you'll understand. For the rest, sorry but it's not entirely my story to tell. Suffice it to say that knowing that I would likely die young took on a new significance when I found a reason to live.

Extraordinary accomplishment requires extraordinary motivation. I had been killing myself (slowly) for decades. Fixing the damage was going to either require many years of slow weight loss, requiring steady motivation year after year, or an even more concerted effort for a shorter period. Frankly, I think the former would have been harder.

Fortunately, most people don't need to lose more than half their body weight. Those of you who do, I hope you're able to find sufficient motivation to do what's necessary. In either case, I am here to testify that it can be done; no surgery, no starvation. It isn't easy, but it is possible.

I'll detail the choices I made along my journey in future posts. To get you started, here's where my research began: